This afternoon RVFD along with Sta.600 (Greensboro), Talbot Co. Sta.80 (QAHVFC), Sta.300 (Denton) for the Tower, Dorchester Co. (Cambridge) for the Hazardous Materials Unit, and PM-392 were dispatched for a reported an Aircraft Emergency with Haz-Mat, at the Ridgely Airpark off of Race Track Road in the 4-9 Box.  Squad-405 (8 w/Lt.Stiles) checked up on the air and was advised while responding that Ridgely Police were on the scene advising possible patient refusal, no injuries at this time.  Squad-405 arrived and advised of one plane down, off the runway, on its nose with a hand glider under the wing of the plane.  Officer 422 (Stiles) established Airpark Command.  Further investigation revealed three patient refusals, and a small fuel leak from the aircrafts fuel cell.  With the exception of Chief-80 (Morgan), Eng.401, and PM-392 incoming units were advised to stage.  Due to the small spill, Command canceled all incoming Haz-Mat units.  Command placed the situation under control, and held the assignment to RVFD units and Chief-80.  The remainder units on the scene assisted the airport manager with pumping the remainder of the fuel off the aircraft.  The investigation is being conducted by Maryland State Police and the FAA. 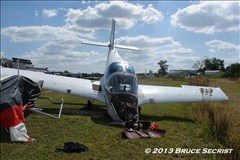 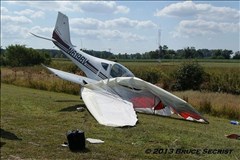 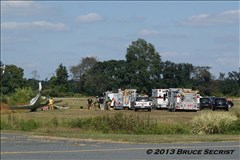 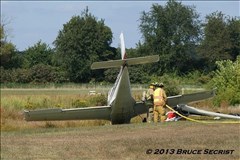 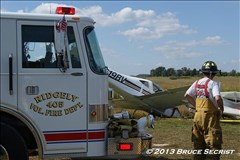 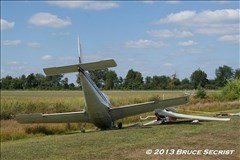 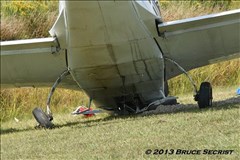